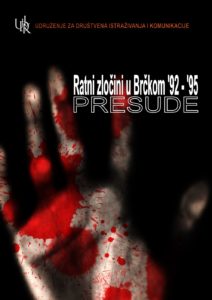 On Tuesday, August 29, 2016, on the occasion of the International Day of Missing Persons, the Association for Social Research and Communications (UDIK) will organize a press conference in order to present the publication entitled “War crimes in Brcko (1992 – 1995) – JUDGMENTS”.

This book is a part of the edition “War crimes – transcripts of judgments of courts in Bosnia and Herzegovina”, within which there is a total of 14 convictions for war crimes committed against civilians in Brcko during the war of the nineties. The aim of this documentation is clearer presentation of the judgments for war crimes in Bosnia and Herzegovina, but also preventing possible manipulation with adjudicated facts regarding convicted war criminals for the pre-war municipality of Brcko. This is also an attempt to build a sustainable peace and create opportunities for building a unique monument of civilian war victims of all nationalities in Brcko District.

The Association for Social Research and Communications (UDIK) helps post-Yugoslav societies to establish the rule of law and to accept the legacy of massive human rights violations in order to identify the criminal responsibility of perpetrators, to meet justice and prevent the repetition of such crimes. It is the affirmation of the value of an open civil society, with clearly defined priorities in terms of promotion and protection of human rights, as well as youth involvement in social and political processes through peace activism.