Home / News / 20 YEARS SINCE THE GENOCIDE IN SREBRENICA – WE REMEMBER

20 YEARS SINCE THE GENOCIDE IN SREBRENICA – WE REMEMBER 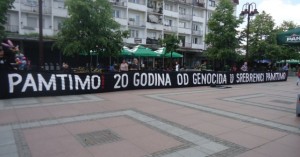 This year marks the 20th anniversary of the genocide in Srebrenica – the biggest crime committed on European soil since World War II.

On this occasion, as a part of this campaign – 20 years since the genocide in Srebrenica, every 11th of the month, the Association for Social Research and Communications (UDIK) and the organizations in the region have organized various activities.

The Association for Social Research and Communications (UDIK) began activities in February when activists of UDIK visited the Memorial Center “Potocari” and paid tribute to the murdered victims of genocide.

In March, UDIK organized a roundtable in the City Council in Sarajevo, where the young people from Serbia and Bosnia and Herzegovina spoke about dealing with genocide in Srebrenica and perceptions of young people in terms of memory of genocide in the future.

In April, activists of UDIK set up a group of banners on the Eiffel’s bridge. The banners with messages of survivors were supposed to remind the public of this massacre.

In May, activists of UDIK held the standing on the Square of Youth in Brcko and after that activity they sent a request to the Assembly of Brcko District of Bosnia and Herzegovina in order to declare a day of remembrance of the genocide in Srebrenica. This request UDIK sent in June to the Presidency considering that Bosnia and Herzegovina and Serbia, but also Montenegro neglecting this issue are involved in the politics of denial of genocide in Srebrenica.

The final activity of UDIK will take place on July 11, 2015 at the Memorial Center “Potocari” where activists of UDIK, together with organizations from the region who took part in the campaign, will organize the standing to pay tribute to the victims.

UDIK reminds that the campaign “WE REMEMBER” is something that united civil society organizations in order to pay tribute to all the victims of the Srebrenica genocide. The goal was to speak about Srebrenica during the whole year and not just in the month of July. The ultimate goal of the campaign is to “put pressure” on countries in the region to bring the Day of Remembrance of the victims of the Srebrenica genocide because Srebrenica is our moral and political issue as well as the final version of all war crimes committed in Bosnia and Herzegovina. Like all crimes of genocide in the world Srebrenica leaves the greatest impression in our memories and memory is what should ensure that the words “never again” never be repeated.

2015-07-08
UDIK
Share
Previous THE INTERNATIONAL DAY OF WHITE RIBBONS
Next PROMOTION OF THE BOOK „20 YEARS LATER: POLITICIANS ABOUT THE WAR IN BOSNIA AND HERZEGOVINA“